Scheduling is based on the information that is available at a given time. We need some way to represent the state of the system and any processes in it and how it changes over time. Gantt charts are used for this purpose. A Gantt chart is basically a glorified timeline that is used to depict the order of process execution graphically.

Below is a list of some well-known scheduling algorithms:

Each scheduling algorithm has its own criteria to choose the next job that will run on the CPU. Since CPU scheduler needs to be fast, actual algorithms are typically not very complex.

Scheduling is based on the information that is available at a given time. We need some way to represent the state of the system and any processes in it and how it changes over time. Gantt charts are used for this purpose. A Gantt chart is basically a glorified timeline that is used to depict the order of process execution graphically. Below is an outline of a Gantt chart 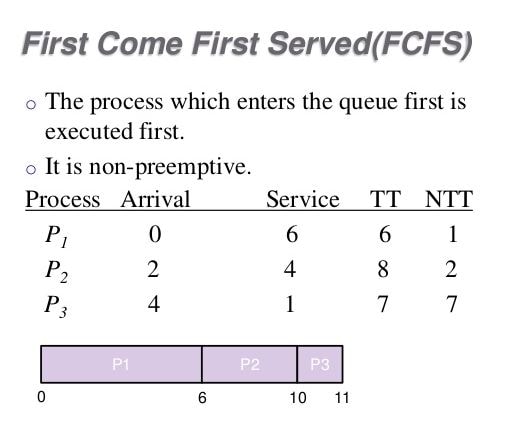 First come first served is the simplest CPU scheduling algorithm. It says that the process that enters first should get. FCFS algorithm is easy to understand. It is basically a queue like those we see in banks, shops, etc.

A drawback of the FCFS algorithm is that the processes may have to wait for excessively long amounts of time.

Suppose that there are three processes that arrive in the order shown below. They all arrive at time 0,  but the system has decided to serve them in this order.

If the processes are served in FCFS order, the Gantt chart would look like as follows:

The waiting time for a particular process can be measured by taking its finish time and subtracting the burst time and its arrival time.

The following table shows the waiting time for each process: 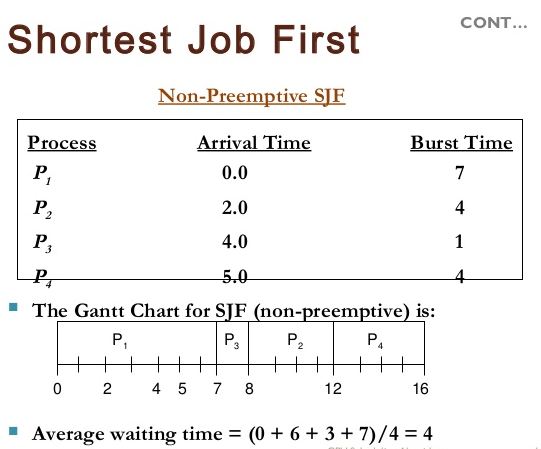 Another way to schedule jobs is to pick the job that will take the least amount of time to complete. In FCFS scheduling, the average waiting time could be reduced by running the short jobs first.

There are two possible schemes of this scheduling algorithm

Non- preemptive: once the CPU is given a process it could be preempted until the current CPU burst finishes.

In the following example there are four processes.

The waiting times for the processes in this example are:

In the following example there are again four processes. Note that process 3 now has a burst time of 1.

The waiting times for the process in this example are: 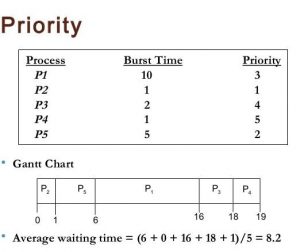 Another way to schedule jobs is to pick the job that has the highest priority. This requires that each process should have a priority associated with it.

Priority scheduling can either be non-preemptive or preemptive. If there is preemption then a high-priority job can remove a low-priority job from the CPU and take over.

Assume that all processes arrived at time 0. First of all, process 2 will get the CPU as it has the highest priority 1 and will finish. Then process 5 will start execution. In non-preemptive priority scheduling, once a process gets the CPU, it will finish its work and then release the CPU.

In the above example the execution takes place in the following sequence:

Shortest job first scheduling is also a form of priority scheduling. In the case shortest job scheduling, the priority is defined as the predicted next CPU burst.

One major problem with priority-based scheduling is that it may not be fair. Some low priority processes may not ever get the chance to execute because higher priority processes keep steeling the CPU. One solution to this problem is to implement aging. The process of increasing the priority of a process as it gets order is known as aging. 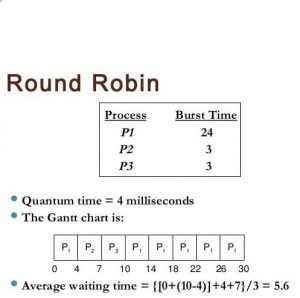 Another way to schedule jobs is to align a small amount of time to each process in which it executes. The small time unit is usually called the time quantum or time slice.

The round-robin algorithm does not allocate CPU to any process for more than one time quantum in a row. If CPU burst exceeds time quantum, it is preempted and placed in the ready queue. That is why round robin is called preemptive scheduling algorithm.

The ready queue can be split into different sub-queues. One sub-queue can be used for each type of processes. An example of 5 level queuing strategy is shown below. The 0 has the highest priority and the 4 has the lowest priority.

The type of a process is automatically identified when it enters the system. It is allocated to the correct queue. There is no way to change queues one a process has been allocated to a queue. There are five queues in the above example. The individual jobs as well as five queues need to be scheduled. Two skill to schedule the queues are as follows:

In this scheme, jobs are first serviced 1. If there is no job in queue 1, then the jobs in the queue 2 are serviced. Similarly, jobs in queue 3 are all serviced only if there are no jobs in queues 1 or 2 and so on.

In this scheme each queue gets a time slice. The queues themselves are in a round robin queue. Jobs is each queue are executed for the specified amount of time. The control is then transferred to the next queue.

Suppose there are three queues:

The scheduling will be implemented as follows: