Following are some important factors that affect the processing speed of a computer:

The first factor that affects the processing speed of a computer is a register. A register is a small, high-speed memory inside a CPU. CPU contains a number of registers.

The data and instructions are stored by registers while the CPU processes them. The amount of data with which the computer can work at one time is determined by the size of the registers. This is also named word size.

The register’s capacity is in bytes. A register can be of one, two, four, or eight bytes. Computers with 32-bit registers mean the CPU can process four bytes of data at one time. The bigger size of the register increases the performance of the computer.

The size of RAM is also included in the factors that affect the processing speed of the computer. The bigger amount of RAM means that more program instructions and data can be stored in memory.

If a computer does not have enough memory to run a program, it must move data between RAM and the hard disk frequently. This process is called swapping that can greatly slow a computer’s performance.

A system clock is an electronic component that is an important factor that affects the processing speed of the computer. It generates electric signals at a fast speed. The time required to execute a single instruction is called clock speed. Clock speed tells us how much time a CPU takes to execute each instruction. CPU takes from 1 to 6 clock ticks to execute one instruction.

Clock speed is measured as cycles per second. Its unit is Hertz (Hz). If a pc contains a clock speed of three hundred MHz, its clock ticks three hundred million times each second. A quicker clock will execute a lot of directions every second 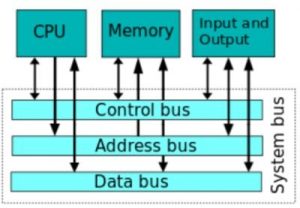 Factors Affecting Processing speed of the computer. The physical path between the components of a computer is a bus. Data and instructions travel along with these pats. The width of the bus decides the number of bits that can be transmitted between the CPU and other devices.

Bus width is also considered in the factors that affect the processing speed of a computer. A higher bus width means that the user can carry more data. It increases the performance of the computer.

A cache (pronounced “cash”) is a high-speed memory that holds the most recent data and instructions that have been loaded by the CPU. It is designed to speed up the transfer of data and instructions. The cache is located directly on the CPU and RAM. It is faster than RAM.

The CPU retrieves knowledge and directions from RAM once while using them for the first time. The cache is employed to store a duplicate of that knowledge or directions. When the CPU needs that data or instructions again, it first checks in the cache.

If the needed data is present there, it retrieves that data from cache memory instead of RAM. This thing speeds up the CPU working. The computer’s speed is greatly affected by the amount of cache memory.

Any Other Factors That Affect The Processing Speed Of A Computer?