Different types of language processors are as follows:

Furthermore, The compiler verifies every statement in the source program and produces machine instructions. Syntax errors in the program are also checked by the compiler. A source program containing an error cannot be compiled.

A compiler translates the programs of only that language for which it is written. For example, the C compiler can translate only those programs that are written in C language.

Furthermore, the advantages of interpreters over compilers are that an error is found immediately. so the programmer can correct errors during program development.

The drawback of an interpreter is that it is not very competent. The interpreter does not generate an object program. It must convert the program each time it is executed. Visual Basic also uses an interpreter. 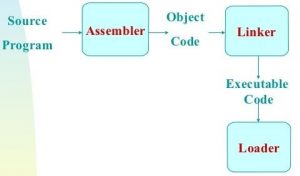 An assembler is translating program that converts assembly language programs into machine language.

Difference between Compiler and Interpreter

Following is a brief difference between compiler and interpreter: