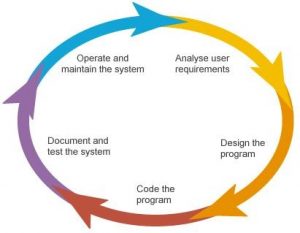 A programmer has to go through the 5 steps of the program development process following stages to develop a computer program:

Step by step details of the program development process follows:

Defining and Analyzing The Problem

In this step, a programmer studies the problem. He decides the best way to solve these problems. Studying a problem is also necessary because it helps a programmer to decide about the following things:

An algorithm is a sequence of steps that must be carried out before a programmer starts preparing his program. The programmer designs an algorithm to help visualize possible alternatives in a program also.

Coding or Writing The Program

The next step after designing the algorithm is to write the program in a high-level language. This process is known as coding.

The process of executing the program to find out errors or bugs is called test execution. It helps a programmer to check the logic of the program. It also ensures that the program is error-free and workable.

Debugging is the process of detecting, locating, and correcting the bugs in a program. It is performed by running the program again and again.

Furthermore, another purpose of documentation is to allow other programmers to modify the code if necessary. Documentation should also be done in each step during the development of the program.