Deadlock is a situation that occurs when a process is requesting a resource that is occupied by another process in a computer or computer network. A deadlock has four common conditions i.e Mutual Exclusion, Hold and Wait, Non-Preemption, and Circular Wait.

In this article, I explain to you what is a deadlock? its characteristics or conditions and important methods that are used to avoid and prevent deadlocks. Here we go!

In a multiprogramming environment, several processes compete for resources. A situation may arise where a process is waiting for a resource that is held by other waiting processes. This situation is called a deadlock.

The following are some examples of deadlock. 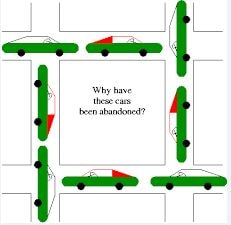 The following figure is of a traffic deadlock. It makes the nature of deadlock very clear. None of the cars can pass unless at least one of them backs up or is removed.

When two trains approach each other at a crossing, both shall come to a full stop and neither will start up again until the other has gone. 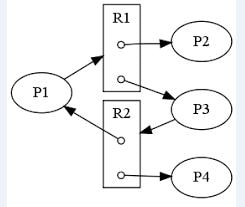 A resource is an object that is used by a process. It can be a piece of hardware such as:

A resource can be a piece of information such as:

Different types of resources are as follows:

The usual sequence of events that occur as a resource is used is as follows:

Deadlock occurs if the following four conditions take place simultaneously in a system:

At least one resource must be held in a non-sharable mode. It means that only one process at a time can use the resource. If another process requests the resource, the requesting process must be delayed until the resource has been released.

A process must be holding at least one resource and wait to acquire additional resources that are currently being held by other processes.

Resources cannot be preempted. A resource can be released only voluntarily by the process holding it after that process has completed its task.

For each instance of a resource, there is a dot in the resource node rectangle. For example, if there are two identical printers, the printer resource will have two dots. The edges among nodes represent resource allocation and request. 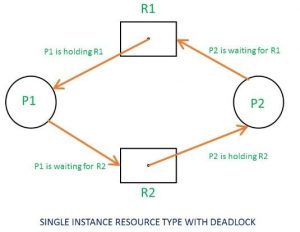 The diagram below is an example of a resource graph that has a cycle but does not represent a deadlocked system. It is possible for process Z to continue execution. When process Z is completed, it will release resource A.

A deadlock can be handled in several ways:

We can prevent deadlock by ensuring that at least one of the four necessary conditions for deadlock cannot occur. If at least one condition is not satisfied, a deadlock will not occur.

Mutual exclusion conditions must hold for non-sharable resources. For example, only one process can have access to a printer at a time, otherwise, the output is disturbed. Some resources can be made shareable like a read-only file.

Several processes can be granted read-only access to a file without inferring from each other. However, deadlock cannot be prevented by only denying mutual exclusion conditions because some resources are intrinsically non-shareable.

Deadlock can be prevented by denying the hold and waiting for a precondition. This can be implemented in two different ways.

Each of these strategies has some performance or resource utilization issues.

Preemption of resources means that we take away sources from processes when they are waiting for other resources. This could work in the following ways:

Problems with this approach are as follows: 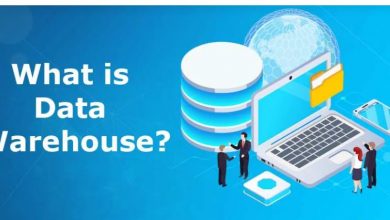