What is Network Topology?

The physical design or the procedure that is followed to construct network connections is called topology in a computer network. It relates especially to the position of the computers and how the cable travels between them. It is also important to select the right topology for the proper use of computer networks.

What are the 5 Network Topologies? 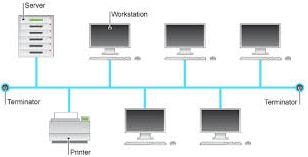 The simplest type of network is the bus topology. In a bus network topology, all computers or network nodes are connected to a common communication medium. In a local network, this channel is usually a central cable called a bus.

If a computer wants to send data to another computer in the network, it sends the data and destination address via the bus. This data and address move from one end of the network to the other. Each computer checks this address and, if it matches with this computer, the computer keeps the data. Otherwise, the data moves to the next computer.

The electrical signal from a computer travels the whole length of the cable. When the signal reaches the end of the wire, it bounces back and travels back up the wire. It is called ringing. To avoid the signals from ringing, you have to connect terminators at either end of the segment. The terminators digest the electrical energy and end the reflections also.

A star network topology is one in which all the cables travel from the computers to a central point, where they are all attached to a device called a hub.

If two computers desire to share data, the sender computer sends data to the hub and the hub sends it to the receiving computer. Every computer on a star network communicates with a central hub. A hub provides a middle connection point so that all computers can correspond across the network. 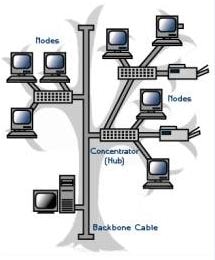 A tree network topology is the combination of the characteristics of both bus and star topologies. It is based on groups of computers in the shape of star topology; then these groups use a bus backbone cable/wire to join together. The use of tree topology is to expand an existing network.

In a mesh network topology, every device on the network is physically connected to every other device on the network.  Various possible ways are available to send a message from the source to the destination. Mesh topology provides enhanced performance and consistency. 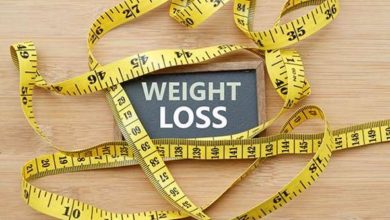 Weight Loss Without Surgery Or Pills 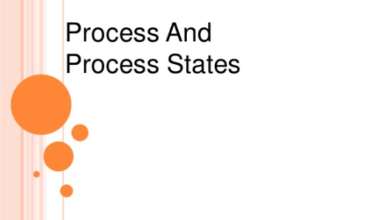