The plotter is just like a printer but is found very rarely in print and photocopy. Why are the plotters are same as a typical printer? Because if you look at the functions and how it works, it’s completely similar to the printer device, which prints out images or text from the input data.

If you want to learn about plotters, their types, and the major differences between flatbed and drum plotters. Then you are at the right point. Let’s begin to read it.

A Plotter is a graphical printer that uses pens and ink for drawing an image or pattern. A plotter is also the first hardware output that has the ability to print large images like architectural engineering images in HD quality. You can say that plotter is a machine that will automatically plot a graph or image based on the data entered.

Do you interested to know what are plotters & how they work? A plotter is an output device that is used to generate high-quality graphics images in a variation of colors. Plotters are also used to create and produce maps, architectural drawings, graphs, and charts.

A plotter performs his work by drawing lines on paper using pens mounted in a mechanical arm. Furthermore, due to its larger size than that of printers, the plotter also contains a printer with the ability to print over a large scale.

Therefore, draftsman is not often encountered because it is not used a lot by people and generally draftsman is broadly used by people in the architecture work.

The plotter is just like a printer but the difference is to draw pictures to print large and wide images as the size of an architectural engineering photo. The paper used in plotters is also larger than the regular paper available on the printer.

How do Plotters work?

The plotter works just like a printer does. The major difference is the size of output which is much wider than printer paper which can cover the complete size of the blueprint for an architectural / engineering building.

A plotter is a unique kind of printer designed in a way to generate computer output in the form of images or graphics. When we connect a plotter to the computer system, normally different shapes of images can be displayed. Landscape architecture requires a huge variety of plotters to produce landscape images, cut down trees as well as help to visualize the effects of all current activities.

Basically, a plotter consists of a head with several color pens that are continuously moving on the drawing paper to print a pre-designed image entered as input on the computer system. Generally, the tool of plotter is divided into two parts i.e. Drum Plotter and Tabletop/ Flatbed Plotter. 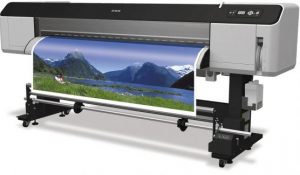 The drum plotter uses a rotating drum or cylinder. The drawing pens are fixed on the drum.  When the drum rotates, the pens move to the left and right. This movement draws the desired image.

Furthermore, the benefit of a drum plotter is that the length of the plot is almost infinite. In order to draw very lengthy images, roll paper can be used. The width of the image is based on the width of the drum.

Let’s read further to get more info about different types of plotters their advantages, disadvantages, and functions. So don’t be shocked when you find a plotter in print or photography. 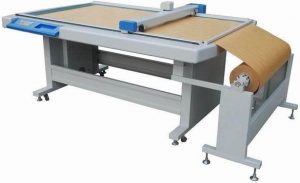 The flatbed plotter is also an important type of plotter that is used to create or draw multi-color images. It holds pens for sketching images. A table-like surface is used to place the paper. Software instructs the pens to go down on the paper. The pen then moves on the paper for designing and creating images. Most flatbed plotters hold one or more pens with a variety of diverse colors and widths.

6 types of plotters that are most commonly used in various fields are as follows:

Pen plotter is mostly used by working with media with a variety of pens or several pens including colored pens. This plotter is basically used for printing on paper or printing in transparent plastic.

But generally, these kinds of plotters generate a streak while drawing on paper or on clear plastic that continues on the whole output.

In Electricity plotter paper it is placed on a flat surface like a table. After that, the process of printing is continuously based on a principle followed by a copier in which electrical voltage is given to the paper.

After that, the ink is speared onto the paper. Then the ink is melted by heating. Based on quality measurements, the electrostatic plotter is not good enough than a pen plotter. However, its output speed is higher than that of the pen plotter.

The thermal plotter is the most commonly used plotter in various fields of life. It uses a pin that is formed electronically. The thermal printer is useful for heating the pin, then the pin is positioned again on a medium exposed to heat which will produce an image as output.

This plotter is also useful for media for making prints on paper or in the form of solid films. Based on development, Plotter is two types that are:

Cutting plotter is mostly used for cutting vinyl, rubber, cork, etc. Such types of Plotters are generally used in shoemaking or clothing-making factories to make and cut patterns.

Furthermore, most of the cutting plotters are used in shoemaking or garment-making factories where the plotter is useful for cutting patterns or raw materials all at once.

The wide-format plotter is mostly used by graphics companies because it has the ability to make very wide color prints. Therefore this plotter is the first choice of graphic artists. The technology used in this painter can be similar to an inkjet printer or a thermal plotter.

InkJet is the most popular kind of plotter that pushes beads of ink directly onto the surface of whatever you are printing on. These plotters typically print in three to four color palettes. The three colors used by inkjets include cyan, magenta, and yellow. These colors can also be mixed to create darker shades, such as black.

Inkjet plotters are also available in Four colors that have dedicated black ink. This is only recommended when you want to generate the clearest shades of black. These plotters can also eliminate many elements of waste during the whole printing process. These inkjet plotters also decrease your set-up time which will result in an increase in productivity.

An Inkjet plotter comes with many unique advantages as they are affordable and versatile. Furthermore, an inkjet plotter always suits every individual or company and their different needs.

The major differences between Flatbed and Drum Plotter are as follows: