The word “idealism” may be derived from “ideals” or “ideas”. So according to idealism higher values are much more important in human life than human life else. This philosophy seeks to make clear man and universe in terms of the spirit of mind.

It takes its due from the philosophy of ideas, involved by Plato, the greatest philosopher of all ages. 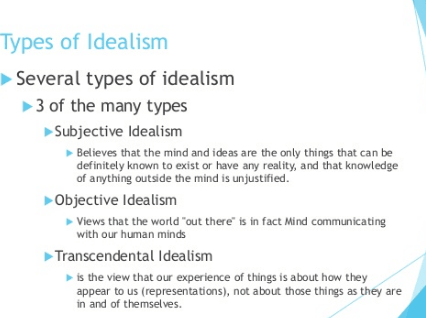 The following are the chief assertions of idealism:

Idealism has great concern with the following:

The aims may be stated as under:

Adams has given great importance to self-realization and the development of personality.

Universal Education: idealism believes in the concept of a universal rate of man. Education, according to idealism, should be based on the teaching of universal truth that is, men belonging to different races carry in them the same delightful glow.

Education must contribute to the development of culture, enlarging the boundaries of spiritual realism. ”

Cultivation of Moral Values: man is essentially a moral being idealism requires that moral, intellectual and aesthetic aspects of his personality should be promoted idealistic education in phase’s characters- building and character formation.

Idealism believes that the goal of human life is the exaltation of man’s personality. Education has to achieve this aim. The school curriculum, accordingly, consists of those subjects which conducive to this goal. The curriculum must reflect the capitalized knowledge and experience of the race.

So it must primarily consist of “humanities” or “cultural studies”.

The inherent or spiritual values, according to him, are truth, beauty, and goodness. These three values determine three types of activities, intellectual, aesthetic, and moral. Each type of activity is represented by studies and should form a part of the curriculum. 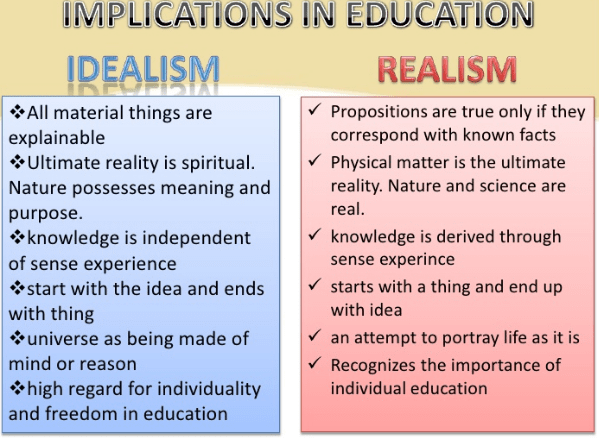 Idealism has exercised more influence on the aims and objects of education than on methods of teaching. It speaks to the general nature of teaching methods. The great Greek idealist Plato, however, advocated and Socratis method-dialectics.

Many educational philosophers advocated many other methods the deductive method, the inductive method, the analyst’s method, and so on. Idealism is not much concerned with the choice of methods so long as its essential objective is fulfilled.

Which is the enrichment of the personality of the public? Idealism lays stress on instruction, activity, and experience. The world ‘instruction’ implies sympathetic guidance by the teacher.

Another factor that idealism emphasizes in the method of teaching is an activity or learning by doing. The normal child should learn through activity. Idealism does not decry questioning discussion and lecture method of teaching.

But it extols the method and spontaneous mental activity. It does so because creative activity leads to self-expression and realization of the highest potentialities of the child. Experience has a significant place in the idealistic method of teaching.

The truly educative acts are those which go on within the experiences of the learner and comprise the students own self-activity. The duty teacher is to develop in him, as insight into duped experiences that he already possess.

In addition to it, the teacher should endeavor to unfold his potentialities by providing him with stimulating experiences. In short, the essence of the idealistic method of activity and freedom, which is regulated and guided.

The naturalist would do without the teacher at times. But the idealist does not belittle the importance of the teacher. In the idealistic system of education, the teacher is indispensable. The immature pupil not be expected to be able to understand by his own intelligence.

It is only under the enlightened advice and able guidance of some individuals of mature understanding and seasoned experience that the child can have such a knowledge. Thus, according to the idealist, there can be no teaching without a teacher.

The immature learner can never be able to perfect his personality unless there is someone to teach him to methods of becoming perfect. The universe is a rational system in which the teacher forms one part and the pupil another.

The teacher is thus necessary for advising, directing, and even controlling the conduct of the pupil in order that he may able to ensure the perfection of his personality. The idealist teacher can guide and help his pupils in three ways.

Firstly, he can influence them by is personality, i.e, by associating with them personally. Secondly, he can suggest questions and problems to them and encourages them to think for themselves. Thirdly, he can enable them to understand the problems by following the scientific method of analysis and synthesis.

According to Ross, the idealistic scheme of studies, the teacher is needed “to assist the educed, who is developing according to the laws of nature, to attain levels that would otherwise be denied him.”

According to idealism, education is a process in which  “the educator as well as educed is working out his salvation.” The pupil is as much as a necessity for the teacher as the teacher for the pupil.

Idealists like to give freedom to children. But that will be a qualified freedom. It should be for activity. Freedom does not mean a license or waywardness. It implies responsibilities. It should be regulated and guided freedom, restrained freedom.

The idealists’ emphases are on self-disciple. He believes that human behavior should have internal controls, rather, even such external controls as praise and punishment. The place violation in discipline is highly valued. Idealism believes in inner discipline.

Idealism advocates the cultivation of higher values of life through moral and religious instructions. It accepts restraint on freedom. It requires that teachers to present good examples because the child considers the teacher to be an ideal person to be evaluated by his pupils.

Idealism has contributed to the modern educational thought and practice in the following way: