A monitor is an important output device. All results of processing are shown on the monitor screen. To learn more about monitors, their types, the difference between various types of monitors, functions, and features are the core points discussed in this article. Let,s read it.

The monitor is the most important and commonly used output device. The result of the processing displayed by the monitor is called output. A monitor looks the same as a television. It is used to display images, text, videos, etc. 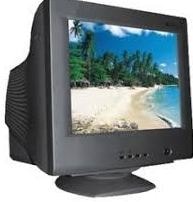 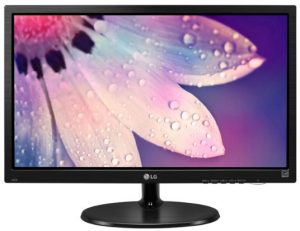 Monitor uses the cathode ray tube (CRT) technology. CRT tube uses an electron beam to generate an image on the screen. CRT is based on one or more guns that fire a beam of electrons within the screen. Very tiny phosphor dots are used to coat the screen from inside.

Electrons beam frequently falls on the surface of the screen. Every beam fall occurs in just a fraction of a second. In color monitors, CRT consists of three guns. These guns generate red, green, blue (RGB) colors. The other colors are generated with the combination of these three colors.

Monitors are available in different sizes. The standard monitor for personal computers is 13 to 16 inches. The size of the monitor is measured diagonally.

The resolution of a monitor is the number of pixels on the screen. It is the image sharpness of a display screen. It is expressed as a matrix. A resolution of 640×480 means there is 640 horizontal pixels and 480 vertical pixels. The actual resolution is determined by the video controller, not by the monitor. Most monitors provide resolutions of 640×480, 800×600, and 1024×768.

The number of times the electron guns scan every pixel on the screen in one second is called refresh rate. It is measured in Hertz (Hz) or cycles per second.

The distance between the phosphorus dots that create a single pixel is called a dot pitch.

A display screen must have a video display adapter attached to the computer to display graphics. It is also called a video graphics card. It is a circuit board that determines the following things:

There are three types of graphics cards:

SVGA stands for super video graphics array. It supports 256 colors at high resolution than VGA. It has two graphics modes. these are 800×600 pixels and 1024×768. SVGA is also called 8-bit color. SVGA is the most common standard used today.

XGA stands for extended graphics array. It supports up to 16.7 million colors at a resolution of 1024×768 pixels. XGA supports 256, 65536, or 16,777,216 colors depending on the video display adapter memory chip. It is called 24-bit color or true color. XGA provides the most sophisticated standard for color and resolution. 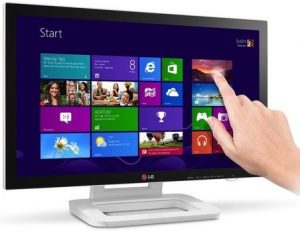 Touch screen monitors permit input as well as output. A touch screen is a special type of VDU (Visual display unit). It has a grid of light beams or fine wires on the screen. It lets used the user interacts with a computer with the touch of a finger rather than typing on a keyboard or moving a mouse.

Icons or menus present on the screen allow a user to enter data by touching on these icons or menus. Generally, computers with touchscreen use sensors to detect the touch of a finger.

Monochrome monitors are mostly used for simple words processing and other applications, which do not require colors and graphics. Color monitors display output in different colors. Graphics, pictures, and colorful images are best viewed in color monitors. 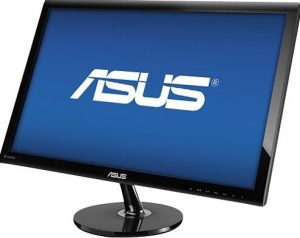 LCD monitors create images with a special type of liquid crystal that is normally transparent but becomes solid when charged with electricity. These monitors are passive matrix and active matrix.

The advantages of flat panel display over CRT are as follows:

Difference Between CRT and LCD