Want to know What is a Computer? How Many Types of Computer? A computer is a programmable electronic device that evaluates data according to a set of commands,  produce output as a result and store it for future use. Important types of computers are  Personal Computers, Micro Computers, Minicomputers (Midrange Computers),  Mainframe Computers, Super Computers, Servers, Workstations, Embedded Computers, Desktop Computers, Hybrid Computers.

What is a Computer?

Definition: A computer is an Electronic device that is designed & programmed to take raw information from the user and converts it into processed and understandable information.

For example, when we write some text, information is sent to the computer by the keyboard and the result is displayed to us via a monitor. Computers are very fast in speed and can perform very high mathematical calculations in seconds.

How does a Computer System Work?

A computer works in 4 basic steps:

Let us now understand what is input, process, and output.

The data and information that we enter into the computer are called Input. Data means letters, numbers, pictures, or any instructions. We input data using a keyboard or a mouse.

The process is done by the CPU. Process means doing some work on the data that we have entered. The CPU does all the thinking and calculations with the data given. The CPU is called the brain of the computer.

Output means the final result when the CPU finishes processing the data. The output is displayed on the monitor. Monitor and Printer are the most common output devices.

Storage means saving the data & information. A Computer system has different storage devices that are used to store data permanently. This data can also be retrieved as and when required.

Furthermore, A computer has the power to perform complex and repetitive tasks more quickly, precisely, and reliably. Modern computer systems are electronic and digitalized. The actual parts like wires, screens, system units, and circuits are called hardware.

The set of commands that are used to operate a computer system is called software.  Click on the below button to explore all general-purpose computers  hardware components:

What are the 10 Types Of Computer?

The personal computer can perform input, output, processing, and storage activities by itself. It consists of input & output devices, storage devices, memory, and processor. It may consist of single or multiple processors. Commonly used personal computers are PC and Apple Macintosh.

The microcomputer was invented in the 1970s. Its basic purpose is to perform home computing and dedicated data processing. This type of computer can process data and information. So advanced in technology have improved microcomputer capacities resulted in the explosive growth of personal computers in industry.

So in 1980, many medium or small design firms were finally introduced which results in the low cost and availability of microcomputers. After this time, it becomes possible for all the companies & industries to use this microcomputer because of its low cost.

Microcomputers can be divided into three types:

A workstation is a computer designed for individual use that is very fast and more efficient than a personal computer. A typical workstation computer is usually configured with some version of networking software, network interface card, and the necessary cables.

Minicomputers are machines known as “Midrange Servers” used by small businesses and firms. A minicomputer has less processing and data storage capabilities than super and mainframe computers.

Clients use terminals to get connected to a mainframe computer.  A terminal is a device that has just a keyboard and screen. The user uses the terminal to put input to the computer and receive the result as an output on the screen. The terminal itself has no processing and storage capabilities.

A supercomputer is an extremely fast computer with the fastest speed and huge memory that can perform billions of instructions per second. A supercomputer costs about 30 M+ dollars. The first supercomputer “CDC6600” was designed by Seymour Cray in 1964.

Supercomputers refer to the class of most powerful computer systems that are used to do high-profile jobs like weather forecasting, genetic analysis, and code-breaking that need many calculations.

A server is a computer with the ability to provide services to other computer programs and their users connected to it through a network. Servers are physical computers dedicated to performing some computational tasks on behalf of clients. Important types of servers are:

A desktop computer is designed in a way that all its components fit on a desk or table.  Desktop computers are based on a system unit that manages and controls all computer operations and peripheral devices like input, output, storage, and communication devices connected with it.

Desktop computers are available at a low price. These types of computers are mostly used for building a network inside an organization, institute, or industry

A notebook computer normally known as the laptop is a small portable briefcase-sized device with a small screen i.e LED or LCD and keyboard. It is an extremely light-weight & powerful computer than a PC. Notebook computers typically weigh less than 6 pounds (2- 2.5 kg).

It has the same approach as a personal computer with all applications but portable in nature. When we are working in a mobile computing environment, a notebook computer is the best replacement for a PC.

A tablet computer or tablet is a mobile computer with a touch screen interface, battery, and circuits mounted in a single unit. A tablet computer is normally equipped with all cell phone functions like calling or wireless internet & sensors including cameras, microphones, and finger or stylus gestures.

PDA is the abbreviation of the personal digital assistant. It is a handheld computer with a small display of use stylus to operate. PDA works as a personal information manager that synchronizes with a desktop computer to give access to contacts, address book, notes, email, and other features.

Embedded computers are defined as special-purpose systems in which the computer is completely embedded inside the device it controls. An embedded system performs pre-defined tasks or a few dedicated functions. In general, it does not provide programmability to users like PC. 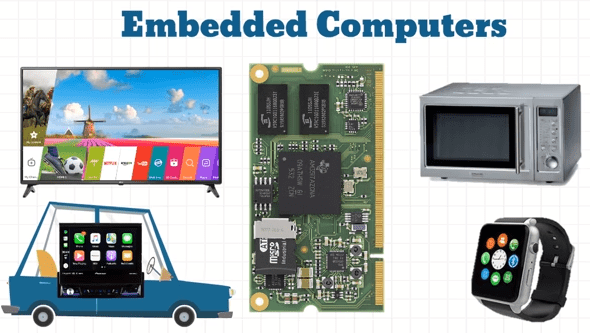 Logical operations are handled by digital components while the differential equations are normally performed by analog components. Hybrid computers are used in hospitals to measure and monitor the heartbeat of the patient and the devices used at petrol pumps for fuel refilling.

We can use hybrid computer devices to examine the patient’s heart function, temperature, blood pressure, and other signs. This measurement may then be converted into numbers and displayed in digital form.