A mainframe computer is an ultra-high-speed computer designed to perform high-volume processor-intensive computing. Mainframe computers are used for scientific purposes and by large-scale businesses.

What is Mainframe Computer?

They are also referred to as large-scale computers but supercomputers are larger than mainframe computers. These computers require a large clean room with an air conditioner.

Hence it is very expensive to buy and operate mainframes. Since they can support a large number of types of equipment and have multiple processors.

They can handle the input and output requirements of several thousands of users. For example, IBM s by three nine zero mainframes can support 50,000 users simultaneously. 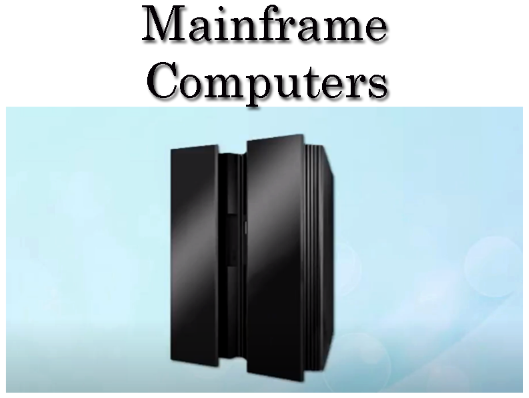 the users often accessed the mainframe with terminals or personal computers. There are basically two types of terminals used with mainframe systems. They are

If a personal computer is used as an intelligent terminal, facilitates access to data and other services from the mainframe system. It also enables local storage and processing of data.

Mainframe computers are used as servers on the World Wide Web. They are used in large organizations such as banks Airlines and universities where users need to access the databases at the same time.

Which is usually organized into one or more huge databases. IBM is the major manufacturer of mainframe computers.

The very first mainframe computer was Harvard Mark 1 whose development started in the 1930s and was fully completed in 1943. It weighed five tons filled an entire room.

Back in the 80s and 90s, this machine was integrated with our day-to-day lives and we don’t even know it. Such as

But are not as popular to the public compared before due to it being expensive bulky in size and the need for a person with good knowledge of computer skills to operate such machines also.

Mainframe computers are utilized in various applications and fields due to their remarkable performance and reliability. It is expensive, bulky in size, and the need for a person with good knowledge of computer skills to operate.

Another factor that contributed to its demise was the rise of personal computers. It includes desktop computers laptops tablets smartphones and smartwatches which are attainable at every price point portable.

Despite all of this mainframe computers do have a place in this world. Wherein many organizations still utilize such computers to this day.

Such organizations include ford motor company Walmart bank of America emirates airlines Nike and many more.

To sum it all up the world we are living in revolves around mainframe computers and even if new technology arrives it would still be relevant today as it was on the first day it was.

You Can Also Read About: