What is a Computer?

A computer is a programmable electronic device that evaluates data according to a set of commands,  produce output as a result and store it for future use. A computer is controlled by programmed instructions. It performs four general operations i.e input, processing, output, and storage. 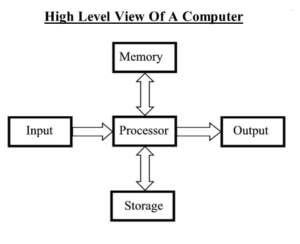 A computer is an electronic machine that consists of Input & Output devices, CPU, Storage devices, and communication devices. These components of a computer are necessary in order to operate a computer successfully. The most important component of the computer is the CPU Called also the “Brain of Computer”.

The list of main components of a computer are:

Categories of Components Of Computer

Parts Of Computer And Their Functions

The physical parts of the computer system with their functions are explained below:

It is difficult to decide between AMD and Intel, dual-core or quad-core, i3 and i7 due to lack of knowledge and their differences. The central processing unit (CPU) is also called the computer brain. There are different types of computers, laptops, smartphones, tablets, and TVs that have their own CPU. This is very small chip is small in shape of a square and is mounted on the motherboard of the device.

The motherboard is mounted within the system unit and all the vital components of a computer system are located directly attached to the motherboard.

Other peripheral parts of the computer, such as hard disks, floppy disks, and ROM-CDs, are connected to the motherboard through cables. The size of motherboards is getting smaller with the advancement in technology.

In computing, a bus allows information to be transferred between different components of a computer. For example, it can be used to connect microprocessors to central memory, storage devices, or peripherals. From a technical point of view, it consists of a set of wires or “tracks” in an integrated circuit.

Each of these paths allows information to be presented in parallel. Therefore, their number affects the speed of data transfer between computer components. That’s why we talk about such processors in 32-bit or 64-bit.

A hardware component that enables a user to enter data and instructions to a computer is called an input device. These devices are used to feed information or provide control signals to the computer. Keyboard, mouse, microphone, scanner, digital camera, and PC camera are the most common input devices.

Keyboard: The user can use a keyboard to enter text. It contains alphabetic, numeric, and other keys for entering a different type of data.

Mouse: a mouse is a pointing device. It controls the pointer on the screen. The user also gives instructions to the computer through a mouse. It contains different buttons.

Microphone: The user can use a microphone to enter input in the form of voice into the computer.

Scanner: it read and scans the hardcopy and graphics and produces the results in digital form.

Digital Camera: we can use a digital camera to take and store pictures in digital form.

PC Camera: A PC camera enables a user to create a movie and take photos on the computer. furthermore, the user can also use it to make a video phone call. 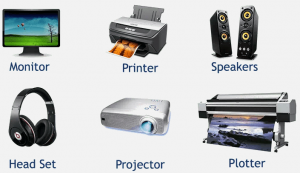 Monitor: a computer can also use a monitor to display text, graphics, and video output.

Printer:  if the user wants to get output in printed form on paper, then he can use a printer.

Speakers: the speaker is also a hardware component that almost produces output in the form of sound, music, and voice.

Memory: Memory is also an important component of a system unit. Memory is used in a computer to store data and instructions temporarily. Furthermore,  it loses all its information when the power is turned off. These chips are connected to a motherboard.

RAM Cache: Another major component of a computer is RAM, also known as cache, which is used to increase speed and improves system performance.

The important operations that must require RAM to run include: processing images for graphic design, editing movies or photos, and running multiple programs at the same time.

The hardware components that can be used to store data, commands, and information permanently for future use are called storage devices. Some important storage devices are the floppy disk drive, Zip drive, hard disk drive, CD-RW drive, DVD-ROM drive, etc.

Hard Disk Drive or HDD: Hard drive is the fundamental component of a computer and its function is to store and maintain permanent and temporary files. This is used to store data in different forms. For example, inside the computer hard drive, you can store an operating system, application software, spreadsheets, computer programs, family photos, office documents, etc.

D-ROM Drive or DVD-ROM Drive: CD and DVD are the two most commonly used storage media.  These storage devices have the ability to store a large amount of information related to music, data, and software. A CD has the capability to store 74 minutes of music. On the other hand, a DVD is capable of storing 17 GB (in two types). A two-type Layer DVD has a capacity of 26 ordinary 665 MB CDs.

D-Writer or DVD-Writer: CD-ROM and DVD-ROM drives are not capable to read or write data on CDs or DVDs. CD-Writer and DVD-Writer are specially used for reading and writing information on these storage mediums.

Floppy Disk Drive or FDDA: Floppy drives are small pieces of computer hardware used to store a small amount of data on a small disk. The most well-known type of floppy drive is a 3.5-inch or 5.25-inch drive.

Peripheral devices are not directly connected to the system unit.

These devices can be connected to the system unit by means of a cable or wireless media. Examples of peripheral devices are Keyboard, Webcam, Barcode Reader, etc.

The modem is an important communication device. It connects computers through the internet. A modem is a device that connects your computer device to the telephone line in order to access the internet connection. By having a modem, your device gets access to an Internet Service Provider (ISP) through telephone lines. This way you can connect to and take advantage of the Internet.

Modems come in two forms: Internal or External. Internal modems are located on one of the development slots inside the system unit on the motherboard. External modems connect to either the serial port or the USB port. It enables the computer to communicate with other computers via a telephone line or cable also.

Of course all computer components could not function without a power source that is called a power supply .

All these components are joined together to build up a computer system.  we hope you get the right information after reading this article. Plz, don’t forget to share with your besties. still, have any queries! feel free to let us know in the comment section. we will respond to you at the earliest.