Computer keyboards are basically designed for human-computer interaction. Different types of keyboard models are available based on size, appearance, and application. Each of these models is uniquely designed for the user and meets the requirements of a specific group of users.

According to global standards, a computer keyboard normally has 102 to 104 keys. Professional keyboards are designed for gamers or typists, and other models for casual users.

This product also has different models in terms of the type of construction, quality, and additional shortcuts. Some keyboards do not have numbers on the right side and the so-called calculator section has been removed, which has a smaller number of keys than keyboards with a calculator.

Here is the list of major types of keyboards in computers:

Office Keyboard is a keyboard developed for typing and using Office software. These types of keyboards have very soft keys and are designed with great care. Because of the high typing speed of professional typists, typing keyboards should be constructed to have the lowest possible sound when typing, in addition to the softness of the key.

In some types of typing keyboards, there is a place at the bottom of the keyboard so that users can put their hands on it while typing and have less tiredness in the long run. Essentially, typing keyboards or office keyboards have shortcut buttons to make things easier for users. These buttons include the operations of copying, pasting, moving, or executing some Office software.

Basically, the shortcut keys used in these keyboards consist of the pause, run, jump before and after, and volume adjustment buttons.

The multifunction keyboard is one of the important types of keyboard. This keyboard is designed to be used for various tasks, such as typing, surfing the Internet, streaming media, and other daily tasks.

Gaming keyboard or gaming keyboard is one of the most famous types of keyboards available in the market. Professional gamers require accurate and high-quality gear so that they do not face problems in different situations. One of these products is gaming keyboards.  The best material is used to build a gaming keyboard. 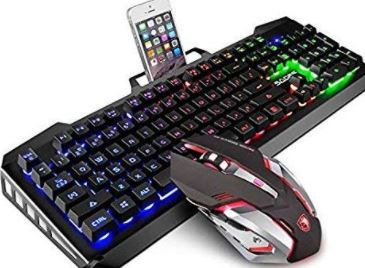 In ordinary gaming keyboards, only the high-consumption keys, which include the keys of different directions and the letters A, S, D, and W, are made of durable silicone. Furthermore, to higher quality, they have a longer lifetime than other keyboard keys. The mechanical key technology is used for Professional gaming keyboards.

The handheld keyboards are designed to be completely ergonomic and like game consoles. In this way, the user can easily hold them and have more control over the work. This type of keyboard has all the alphanumeric keys and is not limited in terms of a set of buttons. But you can use them by pressing two keys at the same time.

The calculator keyboard is placed next to the main keyboard as a secondary keyboard. This keyboard holds only the keys of the calculator section. Accountants and people who need to record math and arithmetic operations have normally used this type of keyboard.

Most of the time, the computer keyboard has the keys of the calculator section and there is no need to use calculator keyboards.

In some cases, such as 14-inch and smaller laptops, the keyboards do not have a calculator section that fulfills the needs of people. In such conditions, arithmetic keyboards are used to handle this problem.

Multifunction keyboards are very advanced products. They are very similar to standard keyboards, but the existence of more functional keys and the capability to synchronize and control information on different computers, separate these keyboards from other keyboards.

These tools are used in big organizations that have multiple monitors to monitor affairs, and their users can control quite a lot of different devices with one keyboard.